Please email liberasworld@gmail.com if you identified member(s) that we have missed.

It is time for a well-needed blog of our recent Libera tours. Haven’t done one in a while, so I need to blow the dust off the typewriter*. (An ancient writing tool.)
In the half term of our school days, we were looking forward to yet another trip to Ireland. Two boys especially looking forward to it were Alessandro and Anthony KM, awaiting their first trip away with the group.
We packed our bags, said our goodbyes and boarded our plane to Northern Ireland. It was weird because we were so used to l-o-n-g haul flights across the world, except now we didn’t have to go that far. It was a nice change. I still fell asleep though.
We landed, and booked into where we were staying. It was very nice, with plenty of space for us boys to unleash our energy. Unpacking the bags, seeing if there were enough bed sheets: we went through again the usual routine. Upon being well rested, we woke the next day singing. Like literally, we had a quick rehearsal to make sure our voices were in tiptop condition. When we weren’t rehearsing, we had quite a lot of time. Plenty of rest and relaxation to balance out the hard work!
Most of our free time was spent in the grounds playing some table tennis, gathering around the old Nintendo 64 and a chance for the unlucky ones who had homework to get some of it done. Snooker and football (or soccer if you prefer) were also available, with a special Libera twist of silent football: we didn’t want to lose our voices of course. Silent football is rather interesting really, telling the other people on your team that you would like the ball, or that you did not think much of their recent pass, without speaking, means using special dance moves and hand waving.
Of course, the other free time is generally just before a concert, where we get to relax and rest, probably reading or playing various handheld games. That’s quite fun too, as the lazy people sleep and the rest link up through the handheld devices, and the next thing you know you have ‘Giant Libera Mario Kart’ on the go. It’s good because we’re nice and hyped up for the concerts.
Ah yes, the concerts. Our first one was at St Patrick’s Catholic Cathedral in Armagh on the first of November. After walking up the many many steps it was a lovely sight, and it had a brilliant acoustic. It was so much fun hearing our voices echo - that always makes things more interesting. As concerts go, it’s usually a sound check before we’re on stage, full show. This was Alessandro’s and Anthony’s first time performing, and they did a pretty good job! 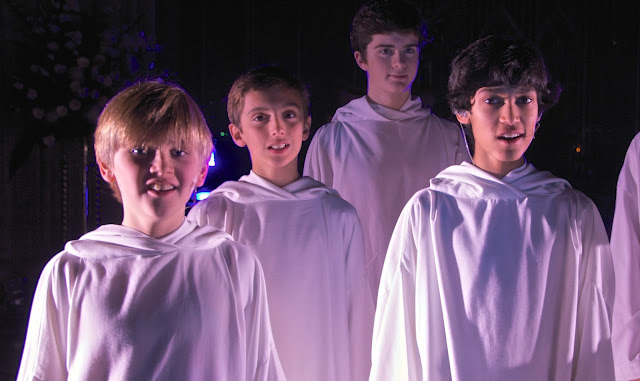 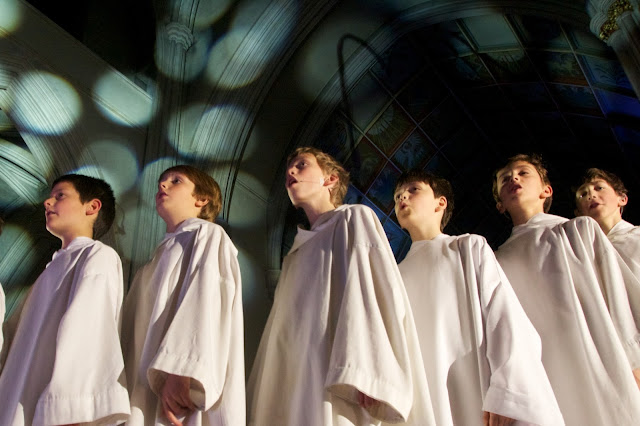 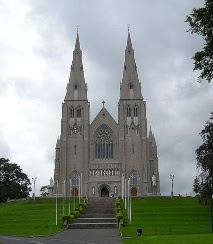 The concert went well, and it was lovely to perform again. The second concert we did was at St Peter’s cathedral in Belfast. It was very nice too, also equipped with a variation on acoustic. That was only the day after the first, so it was very exciting. We had some new songs and some that Libera haven’t performed for a while, like ‘Voca Me’. Tom DL had to sing a top D a couple of times in that – which is about our highest note ever unless you count the ones that went higher by accident.
When it comes to bedtime on nights where we didn’t have a concert, we usually spent them watching a film. We started the holiday off with many episodes of BBC’s Sherlock, which got my compatriots thinking a little. We watched many other films each night, which was a nice touch to the end of each day.
After the concerts were over, we could relax a little. In fact, Saturday was very interesting. We spent the morning going to The Titanic Exhibition, which I must say was truly fantastic.
We approached the star shape building, and we were greeted by a lovely Puss-in-Boots (it was world fairytale day or something like that) who meowed at us and led us through the building. We were first met by information on Ireland, the production of linen and things. This set the scene, as we moved on to a rather interesting rollercoaster-type ride which showed us how the Titanic was built.
We then moved on to an interesting section on life in the Titanic. Movies and diagrams on the different rooms, different roles, different jobs. It was a lot to take in. Next came the facts about all the rats, and the workers, the classes of stay. And finally came the Titanic wreck, with lots of us playing with computers looking at old hairbrushes and shoes from the sunken ship. I didn’t even know it had a twin ship called the Olympic: you learn something new everyday. A quick visit to the museum shop, and we said our goodbyes to the weirdly dressed tour guides. 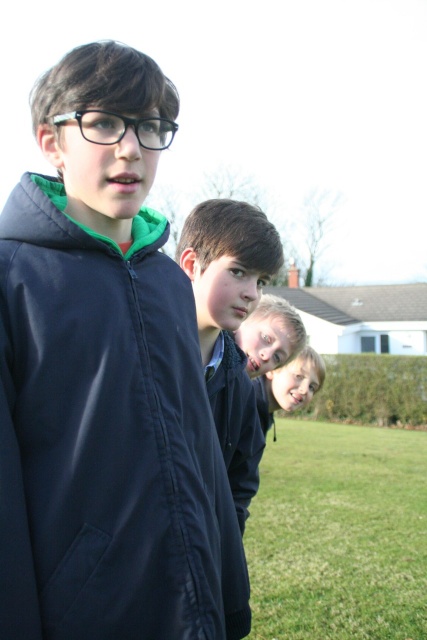 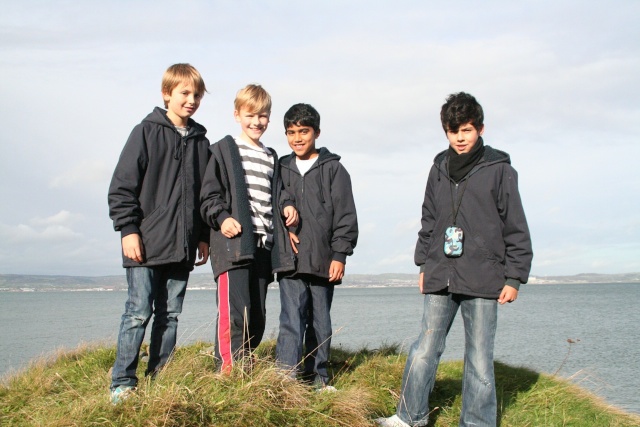 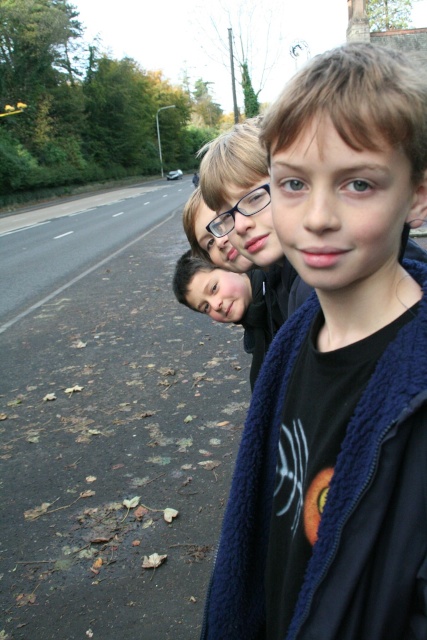 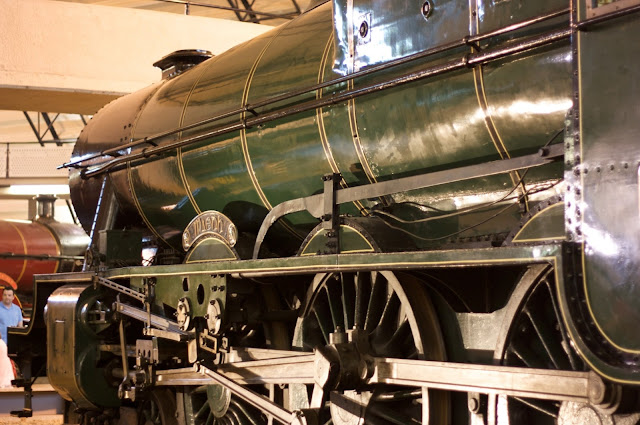 We had lunch, and then went on our next adventure. To the travel museum!
Some of us had been here before in our last Ireland visit, however new exhibitions were put up since then. We went around most of it, but mainly spent a main proportion of the time playing hide and seek with all the steam trains. We saw the different cars too. The seats on the trains were pretty uncomfortable though; don’t know how they managed that back then. After our visit to the travel museum, we made our way back to dinner. After dinner though, it was time for some of the older boys to show off what they had been preparing in time for the evening: The legend of Johnny Longface.  The tale of a man with a horse’s head, complete with video and costume, ensured a lovely end to the evening. It had us running obstacle courses, taking our chances with card games, playing a form of ping-pong with cups, and of course having a go at the old ‘Longface’ quiz. After which all the teams had completed their tasks to receive clues on who Johnny Longface was, he being a member of the team. It was all good fun, and it left us willing to sleep.
We woke up Sunday, ready to do mass back at St Peter’s cathedral. That was really fun, as we got to sing with the cathedral boys choir. It was a pleasure to sing with them, and we had a chat with a few of them afterwards. We sing in a lot of churches, but this was quite special.
Finally, when it was all over, we packed our bags for the second time and headed back home. It was good fun going to Northern Ireland again, and it was a nice break in our school holidays.
So there you have it. But wait. The blog isn’t over yet.
We still have to talk about our concert down in London! Oh yes, the one at St. Georges Cathedral. We were all very excited to perform at home and it was even more special as some of our miniboys had their first taste of singing on stage, and they said they enjoyed it. 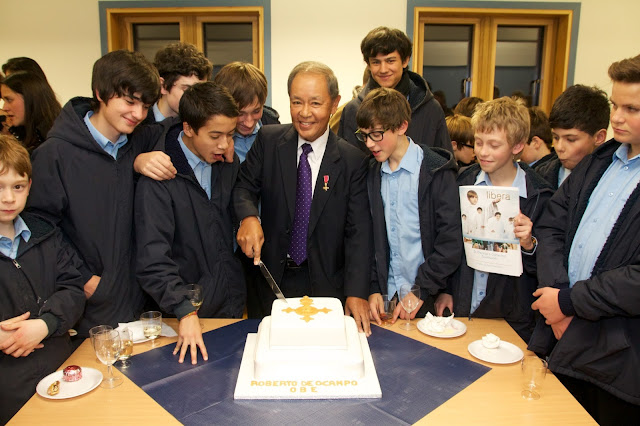 After the concert ended though, it was time for an all-new celebration. We were all invited to Mr Roberto De Campo (OBE)’s celebration party for receiving his OBE. That’s Order of the British Empire. He is a good friend to us, and so we all went to celebrate with him. The food was laid out in platters, and there was a mighty fine cake with a shiny cake version of an OBE medal. We even got to meet the Philippine Ambassador. Good Job Mr. D! (That’s what we call him). Some of us even took platters of the little cakes home. We didn’t want to waste them.
So that was a nice end to our run of performances. And also and end to this update of the blog. Ah, the Christmas spirit is dwelling in the air. We can’t wait.