Hi, my name is Sam.  This was my first Libera tour and my first time in Japan.  It was amazing! In Japan, I really loved all of the cutting-edge technology mixed with the ancient culture.  The mix of the ancient culture and the technology seem to fit perfectly together like one great jigsaw. It is really different to London and it took me a few days to get used to it.  The huge concerts were great fun!  One concert hall had such big stairs that we had to help Mini James (you know, the small one) up the stairs! In between the concerts we really managed to get round Japan.  We all enjoyed the awesome aquarium with the dolphin show.  Ueno Zoo was really exciting, especially for me because I love animals. 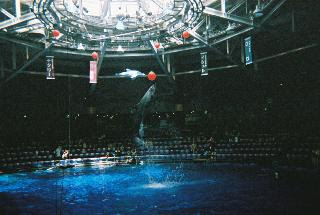 The food in Japan was sensational too.  All the noodle dishes laced with spices like magic dust were excellent.  But my all time favourite was the sushi.  My personal favourite was some sushi called IKA.  This was a small delicate slice of squid on a base of rice held together with seaweed.We were lucky enough to experience the electric ‘whiz’ of the futuristic bullet train that can blast to the other side of Japan in 2 hours.  If you are ever in Japan you have to go on the bullet train.  I also loved the little picturesque gardens that reminded me of a fairy tale. The mini waterfalls were magical and the little trees were pretty with vivid reds and deep greens. I found the sights and sounds of Tokyo and Sendai truly amazing and the life on tour much different to my timetabled and hectic life in London.  I also wish I had a heated toilet seat at home! 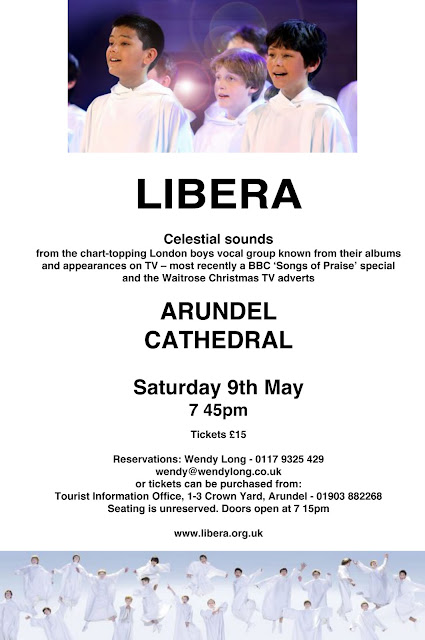 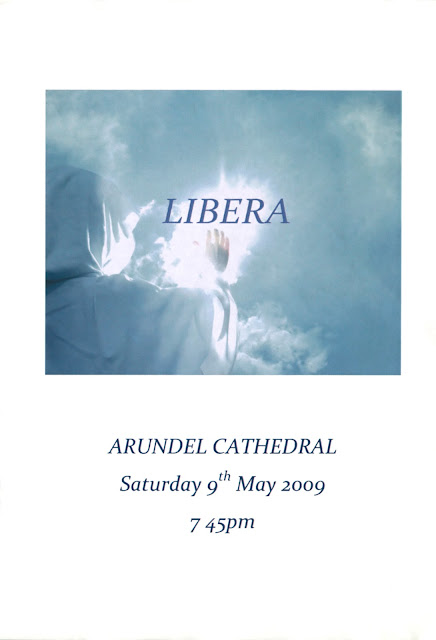 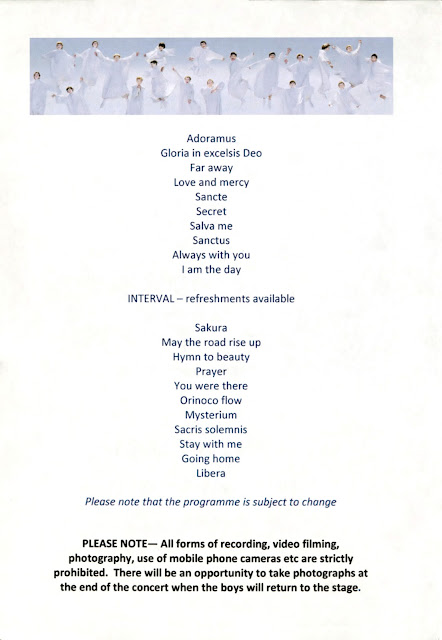 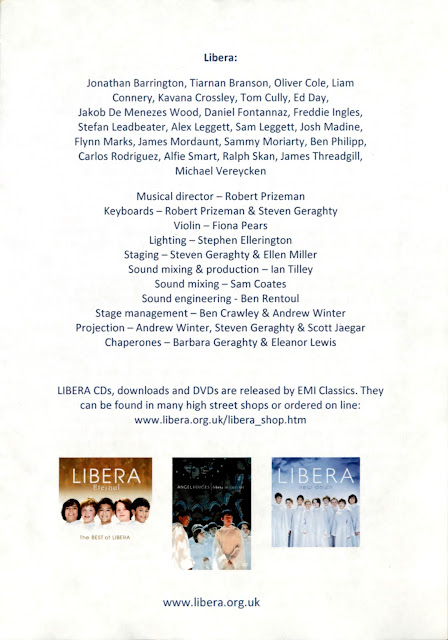 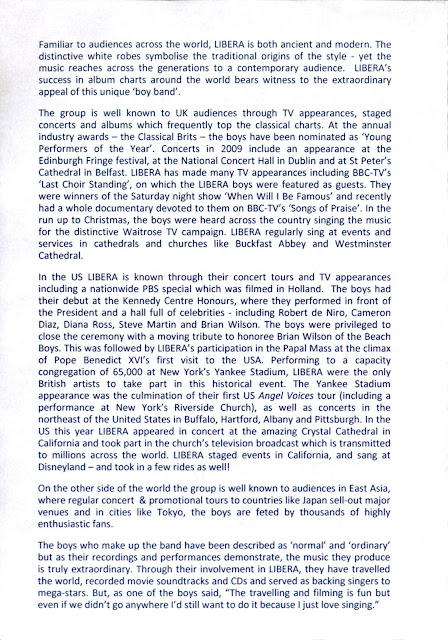 Liblog: Place we went (on tour) - The Crystal Cathedral

After the Japan part of the tour we went directly to L.A., California. We left Japan in the afternoon after an Easter Sunday mass. Thanks to the International Date Line, we arrived in L.A. before we had actually sung in the Japanese mass that morning! That made us all feel very sleepy.  Time travel does that.

But anyhow, my job is to tell you about the fabulous Crystal Cathedral. It gleamed in the glorious sunlight of L.A. as we touched down. That same day, in the evening, we went inside to see the Glory of Easter show, which had been running there all week. 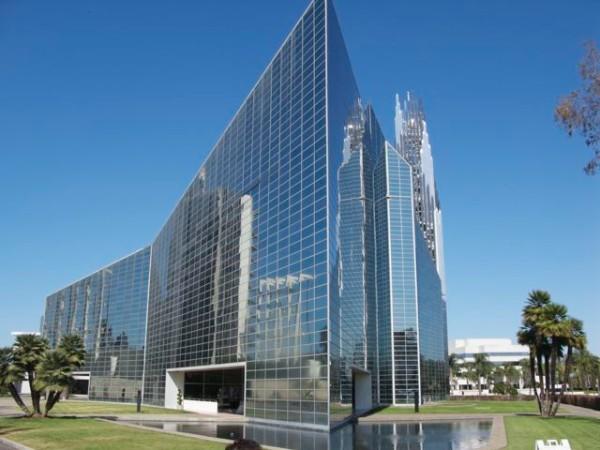 As we entered, we found the massive interior astonishing. The floor was carpeted and the rows of seats were like those of a concert hall. If we rubbed our shoes on the floor and then touched the neck of the person next to us we would give them a static shock! This was quite fun to start with but soon we all got wise (and not to mention paranoid). They had a gigantic organ there as well with the different sections spread all around the cathedral in four sections. But one thing none of us are going to forget is the JUMBOTRON. This was a giant television screen on the  far right. The congregation can see what happens on stage from this big TV. It was funny seeing bigger images of ourselves on the screen – for instance, Mini-James’s head on the screen was in fact bigger than the size of his entire body in reality! 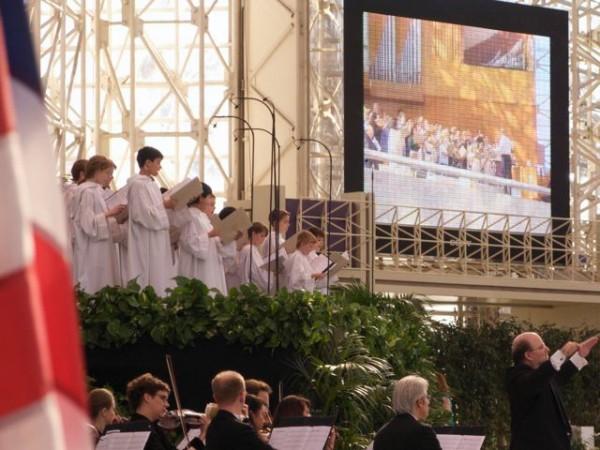 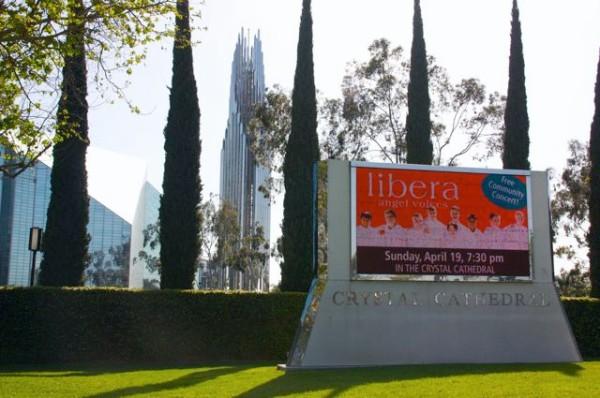 Also outside, and right next to the Cathedral, is a huge and magnificent tower. We performed there the following Sunday in front of a slightly huger audience to that of a normal Church or Cathedral, as we were being filmed and that information sent to trillions of people’s TVs all across the continent (and in most places in all the other continents). When we performed for the ‘Hour of power’ it was really hot – and that was at 9am! We envied our audience because they were happily fanning themselves with sheets of paper which we did not have. When we sang for the second service it got even hotter, as this was at midday. In fact, that day was abnormally hot even for California. It was about 91°F! As London boys, we weren’t used to this, not in April. At least all the doors were open, including the massive ones by the stage, which open from top to bottom of the Cathedral. 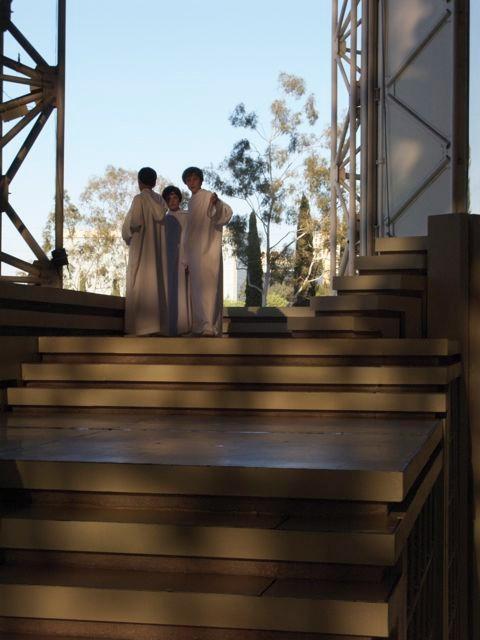 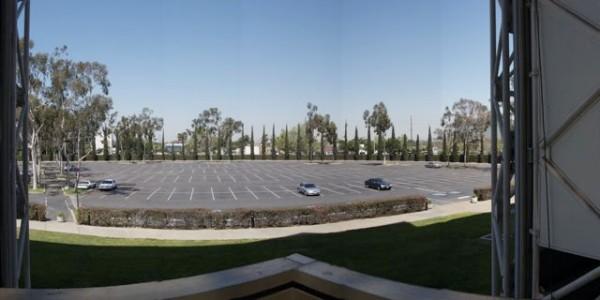 That Sunday we were interviewed during the service by founder of the Cathedral, and friend of Walt Disney, Dr. Schuller. He asked us what we thought of Disneyland – you should go there, by the way – and he also asked us what we thought about the beautiful, sunny climate. We said we loved it because it was beautiful and sunny. We also met one of our biggest fans, a fifteen year-old called Audrey. She had travelled a very long way to see us – from Florida – and we were pleased to see her. That’s one of the really nice things about being in Libera. Apart from the opportunity to trot all across the globe, of course. She sang with us during our rehearsal in the afternoon, and was really good.

The evening concert was, mercifully, cooler than during the day. However, we were still hot because of the heat of all the lights.  Still, this was heat we were used to, and the lighting effects really worked well in the Cathedral because the glass reflected the colours all around - and the fountains and opening door and fireworks made it look fantastic – even from where we were standing on the stage. 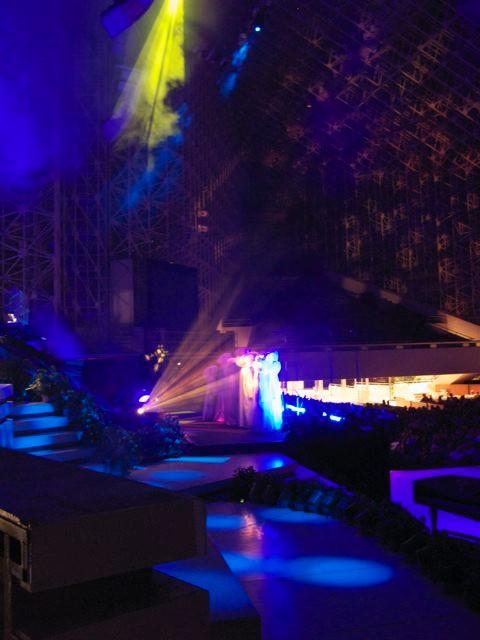 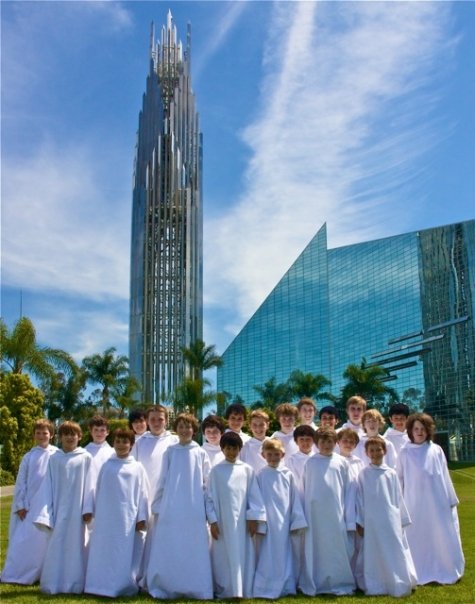 From JB
We went to a lot of different places and did a wide range of activities which varied from the astonishing views in Tokyo (especially at night)  to the general  thrill of  going  to  California. 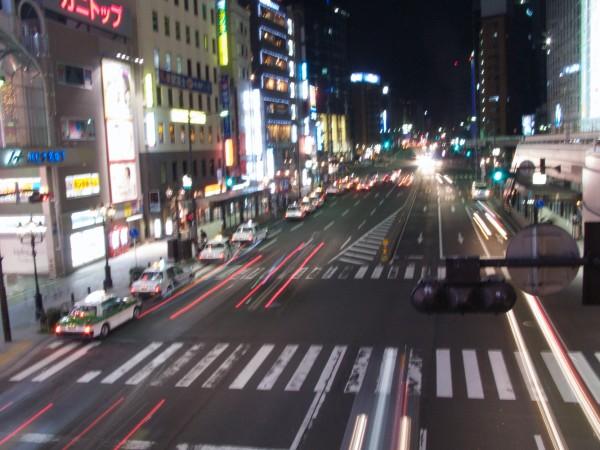 California was very interesting to visit, as it was not as similar to England as I thought it would be. There was a difference in the way people acted, the streets were cleaner -  the weather was hotter (even though that
was expected). But what was different most of all was the sense of trust and community, this was very pleasant.
We visited Hollywood where we saw the Walk of Fame and met some of the cartoon characters along the way. When we met some of our favourite ones the younger boys and some of the older boys went into a frenzy of hugging, dancing and shouting with delight (this strangely did not effect the characters) and in one of these random acts of madness I think the whole lot of us crowded round Tigger and started jumping in appreciation of how high Tigger can bounce himself. But then Tigger starting bouncing after us with a bucket and a strange muffled voice came out saying something about a ‘Tip’. We did not remember this from his cartoons. 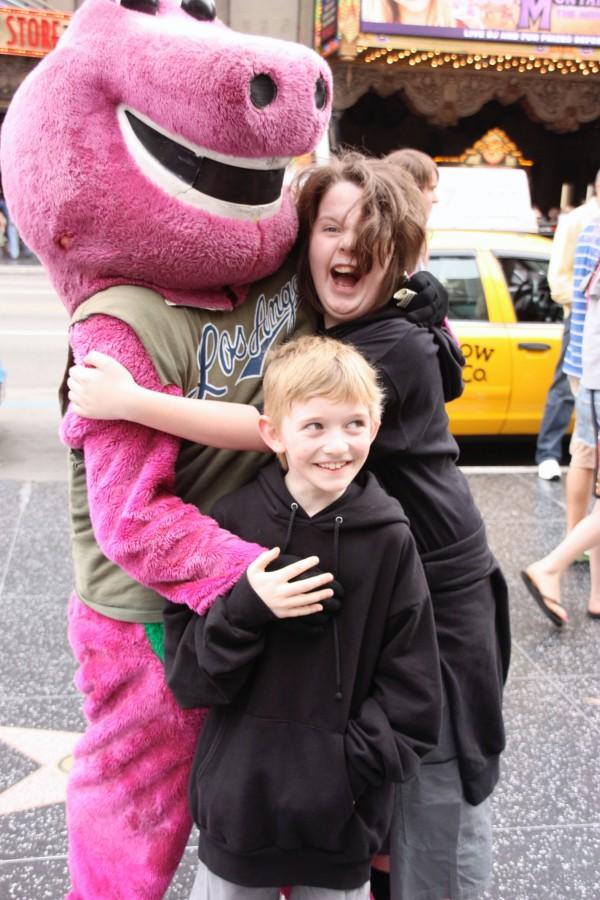 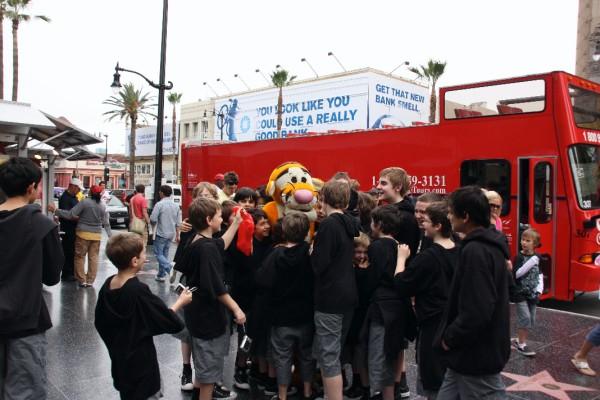 While we were in Japan some of us went to the local Zoo, and saw some other animals. Like Polar Bears, Gorillas, Crocodiles, Elephants, Monkeys - you name it and they were all there doing their bit to keep us smiling. One very interesting encounter was how the Elephant made loud trumpeting noises - but I don't mean the usual the pleasant musical noise. It was more like there was someone behind the Elephant with a microphone and a whoopie cushion! 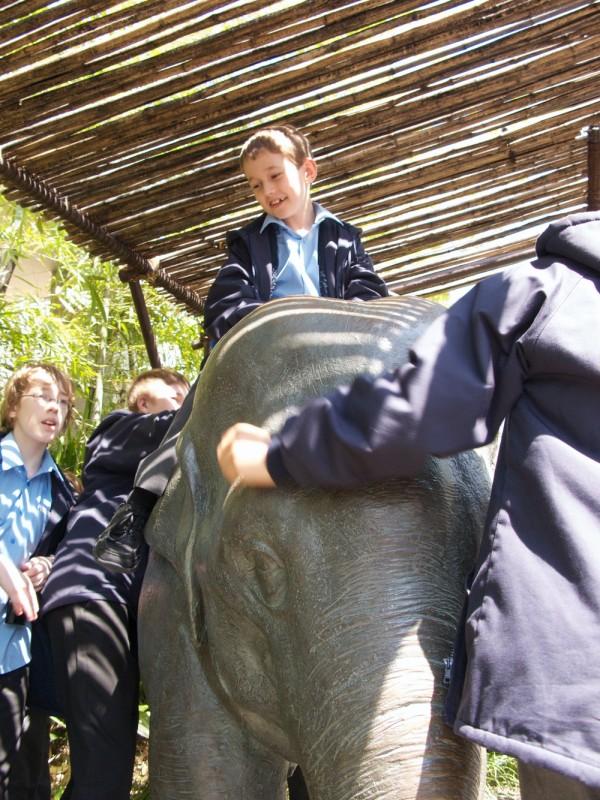 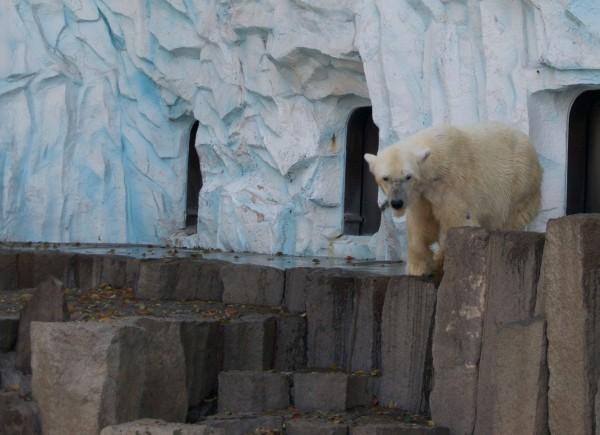 As we journeyed on we discovered the wonders of the monkey and the spectacle of the giant tortoise but nothing seemed to entertain the little ones more than the Monkeys was watching Big Ben craning his neck to manage to fit onto the monorail. 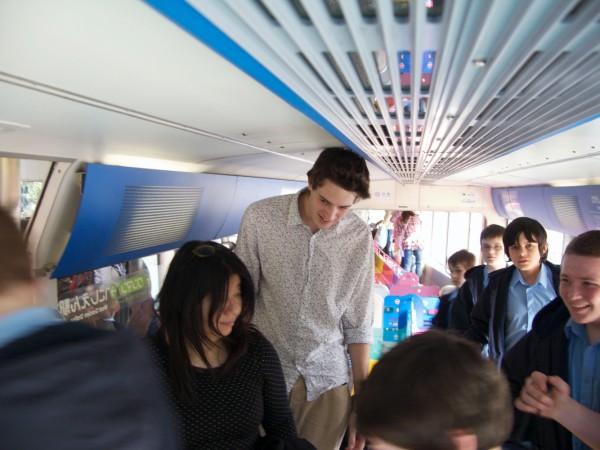 Liblog: Places we went (on tour)

Firstly, there was Disneyland, which we were all really looking forward to. We arrived quite early and were shown backstage where we saw everything you're not supposed to see unless you work there or maybe got really, really lost on your way to the Many Adventures of Winnie the Pooh ride. Anyhow, I shouldn't say much because they liked to retain the magic - we weren't even allowed to film or take pictures. 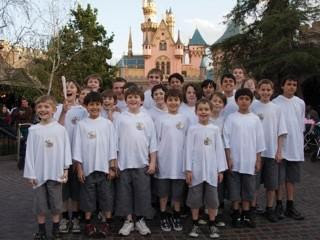 The mini concert was great fun! We had almost become part of the Disneyland cast being on that stage! 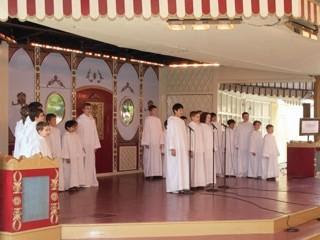 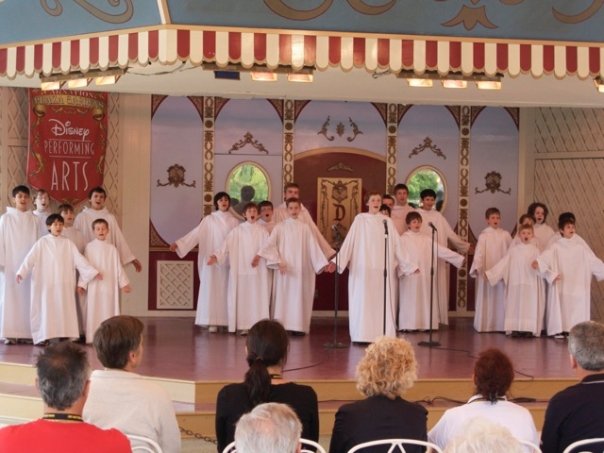 After, we transmogrified back into normal people again and split off into groups for our day in 'the happiest place on Earth' as we kept being reminded on the loudspeaker! But I have to say, when queuing for a whole hour for Space Mountain (a <2 minute ride!) it certainly did not feel like 'the happiest place on Earth'! Despite this, utilizing the fabulous fast track system (random italics visually quoted from the tickets), we were able to jump - actually it was more of a mocking caper right to the front of some really long queues. And then we could definitely say that it was 'the happiest place on Earth'! Other highlights were the fantabulous Indiana Jones ride in which you are placed into a typical kaki coloured jeep and driven around some rainforest or something, all in the Indy style. 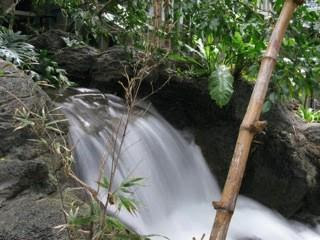 But whoever was driving was so bad that we were continually hurled from side to side, flinging our heads back and forth - I thought we were going to crash it was so realistic. In fact, the driving was so horrendous, I even had to check with Big Ben that it wasn't him (he is in fact an utter maniac behind the wheel).
We also managed to bag some fast tracks for Splash Mountain from a very nice man who worked there and saw us singing. Splash Mountain, is, I have to say, the most annoying ride ever! I refer, of course, to the exasperatingly extensive build up with all those lovely happy Brer-[insert animal name here] animals joyfully skipping around. 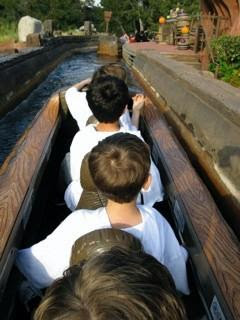 But then, the heinous Brer-Fox hatches his evil plans to boil them all and eat them for his supper. Anyway, this tomfoolery prevails for about three hundred years with some miniscule drops in the route added in just to keep you awake. And then finally you arrive at the big, big drop you've all been waiting for only to get totally saturated and spend the ride home with your own mini Jacuzzi in your lap, but just colder - and with no bubbles. 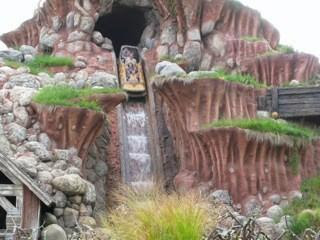 However, clever people like Rob and I sat right at the back and only ended up accumulating a puddle for the way back!
We also went to the sensational Laguna Beach, where lots of us partook in the digging of a colossal hole, by the end in which Mini-James could actually stand up in and not be able to see over the top! 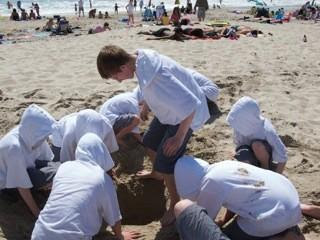 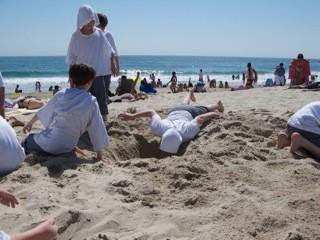 Though saying that, it isn't really any feat considering the size of Mini-James! I mean, I did hear once that in his garden there are a number of rabbit holes, dug, of course, by actual rabbits. And Mini-James, in his mininess, has regular gatherings down in those burrows with them. And they have afternoon tea and elevenses and everything - you just can't trust small people! Anyway, back at the beach during the filming of the American pilot of Time Team, somebody had come to a realisation...and that somebody was me...and that realisation was this: What was the point? But I was fortunate enough to be apprised by one of them, that the intention was to reach Australia (or whatever the American equivalent to the other side of the world is. Russia, maybe?). Afterwards, we were all pretty sure that that hole would probably not be filled for another hundred or so years! Approximately the same amount of time that it takes to complete Splash Mountain!
Josh